by Andrea Bohorova
Published on December 1, 2015

The law of polarity says that everything in the universe has an opposite. If we did not experience sadness then we wouldn't know enough to experience joy. There are both positive and negatives in life, and without one, the other would not exist.

Similar to this, there are both positives and negatives to being a Latina in the United States in 2015. As part of the POPSUGAR Insights Q3 2015 Hypercultural Latina study, we asked Latinas to share with us the upsides and downsides of life in the US.

When asked to share the most positive aspects of being a Latina, 58% of Latinas agree that culture is the most important strength. Out of this group, 14% chose being bilingual, 12% chose community, 7% chose the food, 7% chose sharing and teaching the Latin culture to others, and 6% chose being multicultural, being part of two cultures.

Aside from culture, Latinas in the US consider other factors to be strengths. Twenty-two percent of Latinas believe benefits such as opportunities, career options, financial support, and scholarships are big wins, while only 4% consider physical appearance (beauty, skin tone, unique look, etc.) to be a positive.

However, not everything about being a Hispanic woman in the US is a positive factor; Latinas agree that it comes with some negatives too. Forty-one percent of Latinas agree that stereotypes and assumptions are a negative. Some of the suppositions described are people assuming everyone who is Latin is from the same country, lives in the US illegally, or is not a good citizen (is lazy and/or poor).

Also, almost one-third of Latinas think discrimination is a big downside. Out of this group, 12% listed racism, 8% listed discrimination, 6% listed hatred, 4% listed prejudice, and 2% listed job discrimination. Another negative factor that stood out is that Latinas mentioned Donald Trump as one of the downsides to living in the United States, with his name being the only one cited.

Marketing and advertising to Latinas is extremely important, as they are considered a huge lucrative demographic that will only keep growing. Companies and brands should continue to embrace the positives of what being a Latina in the US means and appeal to the community and culture factors in their strategy to keep engaging this relevant segment. Additionally, learning about the negatives is helpful too, as this will provide the information and lessons on what to avoid and will allow us to look for opportunities within the weaknesses. 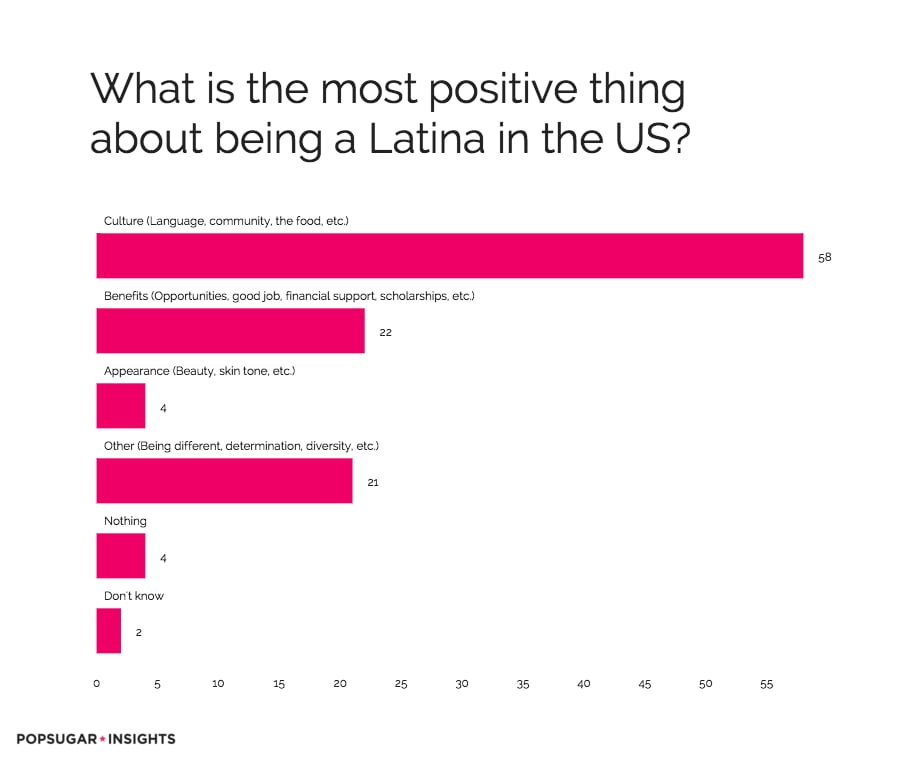